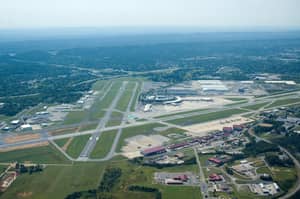 If you’ve ever traveled outside of Alabama, chances are it involved a flight out of Birmingham-Shuttlesworth International Airport.  The airport is major hub for passenger flights and commercial transportation. The airport serves as a pipeline for businesses in the Birmingham region and connects people and commerce around the world. It’s an important part of our community!

The first flight to take off from Birmingham-Shuttlesworth International Airport was in June of 1986. The Birmingham City Council created the airport authority which lead to construction on the airport building and runways.  Just two years later, it became very clear the need for daily commercial and passenger flights was increasing just about every day. Between 1986 and 1988, the number of daily flights increased from 38 to 65! That was in two years. See also our article entitled “Jefferson State Community College Birmingham, AL Review“.

By the time the airport ushered into the 90s, it became clear it needed more space for the growing population and increase in air traffic.  In 1993, the Birmingham Airport Authority approved a $50.4 million-dollar renovation for the terminal zone of the airport. This renovation completely changed the terminal experience for passengers- less wait time, more bathrooms and more food choices while waiting for flights.  At this point, there were about 77 departing flights every single day with more than two million passengers walking through the terminal in a single year.

With the new terminal in place, airlines began offering direct flights to international destinations like Toronto, Cabo San Lucas and other exciting places. With more international flights being added every month, the airport changed its name to reflect its capabilities: Birmingham International Airport.

With a new name, this international airport was ready to soar into the 21st century.  In fact, in 2000 the airport reached an all-time record: 3 million passengers in one year. How about that? In addition to more passengers, the airport added even more flights: 81!

By 2008, the airport decided it was time to honor the man behind the original namesake of the airport: Rev. Fred L. Shuttlesworth. The name was switched back the Shuttlesworth International Airport.  In addition to a new name, the airport needed new space. In 2011, the airport started the Terminal Modernization Project. The project doubled the terminal space- making it possible to expand daily flights and non-stop routes.

With the latest modernization project complete, getting in and out of BHM is easy.  Unlike most major airport hubs, you can get through security and to your gate in under an hour.  Wait times for TSA depend on the day you are traveling, but you should be able to make it to your gate in a reasonable amount of time. Once you are through security, enjoy a stroll through the airport gift shop and enjoy a bite to eat at Starbucks, Jim ‘N Nick’s Bar-B-Q, Good People Brewing Co and Chick-Fil-A.

At BHM, you have your choice of all the major airlines to fly with.  Southwest Airlines, United, Delta and American Airlines all serve this region with a number of daily non-stop flights to regional and countrywide destinations.

If you are a business owner, you’ll be happy to know that more than 23,000 tons of cargo pass through the tarmac every year.  According to BHM, the airport boosts the local economy by $245 million every year.  On average, a passenger traveling to the area will stay 3 nights and spend $170 per day. That adds up fast when you consider how many people fly into this region daily.

BHM is an important part of this region’s aviation history and it will continue to provide opportunities for travelers, local businesses and workers for decades to come. Here’s to the next 50 years!

Brought to you by Rush Bail Bonds Birmingham AL!