The History of Wylam Park in Birmingham AL 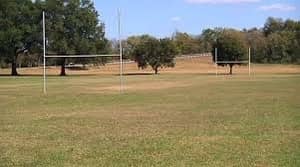 Wylam Park in Birmingham, AL is one of 30 or so public parks located throughout the city. The greenbelt boasts 13.43 acres of open space, basketball courts, and playgrounds. This park is the perfect place to enjoy a picnic for the day, shoot hoops or schedule a community softball tournament.  The park is located off Detroit Street and 9th. It’s a triangle shaped park, with both street parking and a designated parking lot to the south.

Wylam Park is located to the west of Birmingham in the town of Wylam. Back in the late 1800’s, Wylam was its very own town, independent of the nearby big city. The community formed when the Tennessee Coal Iron and Railroad Company opened up two mines in 1886.  Miners from all around the world, including one miner from Wylam, Northumberland in the United Kingdom.

As the story goes, the English Miner, Joseph Martin opened a store and post office.  Martin named the area after his hometown: Wylam. Martin also became the first official mayor of Wylam.  From 1888 and on, this part of Birmingham was known as Wylam.  With a town name and more people moving to the area for work in the mines, the community quickly grew.  People immigrated from all around the world to start a new life in Wylam, Alabama.   Churches, markets, and banks popped up around the area and soon enough it became an epicenter for miners, businessmen, and their families.

Because of the town’s promise of a better life, many of Martin’s friends and family from England followed him to Wylam. At the peak of the mining business, the town’s population reached a bustling 5,000 people. Which of course by today’s standards doesn’t seem like a whole lot of people.  But, back then- it was a bustling town with lots of jobs and opportunities for families.

With the introduction of the streetcar, linking Wylam to Birmingham, Alabama- it soon became very clear the bustling town would eventually become part of the larger city next door. The lines between the two communities were blurred with workers, business owners and miners commuting between the two.

In 1910, the town of Wylam officially became part of Birmingham.  After World War II, the community of Wylam expanded once again, as cars became more accessible to the average worker and home loans gaining in popularity. However, in the 1970s the town hit another major roadblock with the closure of the Tennessee Coal Iron and Railroad steelworks facility.  The area still continues to recover from the loss of the major employer. The Habitat of Humanity is busy at work, building affordable housing for families in the area.

A Till this day, this area is still referred to as the Wylam Neighborhood. The Wylam Park is a popular green space honoring the community history and keeping neighbors connected.  The basketball hoops offer a great, safe place for teens and young adults to play pick up games. It’s competitive and fun to watch these games from the park bench.

The playground is well maintained and features the staples of any fun park: swings, merry-go-round, and slides. The nearby open space makes it possible for kiddos to run off all that energy.  Soccer, softball, and baseball games are also a common sight at the popular park.

Wylam Park is rooted deep in this region’s history. The community is still recovering from the loss of steel manufacturing jobs, however, there is hope and opportunity on the horizon. Please see also our articles entitled “My Great Day At Lassiter Mountain Raceway Park In Birmingham, AL” and “Hiking Ruffner Mountain Birmingham, AL“.

History Lesson by the most experienced bail bonds agents in Birmingham!