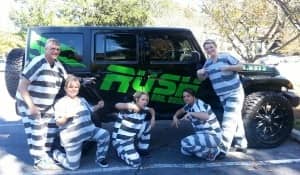 There’s never a convenient time or place to be arrested.  In fact, getting handcuffed and being booked into jail is perhaps one of the most frightening events you may ever experience.  We know what you’re going through.  At Rush Bail Bonds, we’re here to help no matter where you are arrested.  From Birmingham, Alabama to the banks of the Tennessee River and beyond,  our bail agents are ready to help you when you need it the most.  Call today at (205) 543-9209!

My son is in jail in Birmingham, AL but we live in Tuscaloosa.  How can we get him out of jail? Great question.  When we started Rush Bail Bonds more than 15 years ago we realized the need to have our bail agents available at several locations throughout the great state of Alabama.  In fact, we have professional and reliable bail agents in Birmingham, Columbiana and Huntsville.  If you’re several hours away from your loved one who was recently booked into jail, we can work together to get them out at quickly as possible.  But first, we will need a few key pieces of information from you such as the full legal name of the person arrested, where they are currently being held and their inmate number.  By providing us with this information, we can begin to get your loved one our of jail while you’re still on the road!  Our bail agents are available 24/7,365 days a week. Give us a call day or night.  We’re standing by ready to take your call.

What Services Do You Provide?

The answer is simple: working with an experienced bail agent will ensure your loved one gets out of jail as quickly as possible.  It also makes posting bail more affordable for families. We know it’s nearly impossible to budget for bail and other legal expenses that may follow.  The last thing you want to worry about in this situation is money.  When you work with our bail agents in Birmingham, AL you pay 10-15% of the bail amount and then we work with the courts to secure your loved ones release.

What Is A Bail Agent Service?

That sounds too good to be true.  Bail is essential an insurance policy that ensures you or a loved one will be present for future court hearings.  Here’s how it works: By law, an inmate must make a first court appearance before a judge within the first 24 hour of their arrest.  During the first court appearance, a judge will determine how much money an inmate must pay to get out of jail. This is called bail.  The judge determines the bail amount based on several factors including, what the person is accused of, current employment status, criminal history and how likely the accused will appear for future court proceedings.  Once bail is set you have a couple options:  You can pay cash for the total amount or you can work with an experienced bail bond agent in Birmingham, AL and pay just a fraction of the bail.  For example, if your bail is set at $25,000 and you decide to work with professional and licensed bail agent, you pay between $2,500-$3,750.  Our bail agents will also need a co-signer and collateral. We accept several types of collateral: jewelry, property, cars and even stocks.  Once all the criteria is met, we work with the judicial system in Birmingham, AL to get you or a loved one out as quickly as possible.

How Much Is Collateral In Birmingham?

If the accused is released from jail and fails to show up to important court hearings, then Rush Bail Bonds and ultimately, the co-signer is responsible for the total bail amount.  In  the event this happens, bail agents will then begin the process of collecting the collateral posted as part of our contract.  This ensures we have a way to pay the bill if the accused doesn’t follow through on their end of the deal.  We hope it doesn’t reach this point.  Once released it is essential to stay in communication with your attorney.  If you need help keeping up to date on your hearings, our bail agents are more than willing to assist you.

As the largest city in the Alabama, Birmingham has so much to offer.  From the great schools to historic neighborhoods, it’s no wonder why so many call this beautiful city home sweet home.  However, it’s hard to be a productive member of this community when you’re behind bars.  Our bail agents can change that.  We can get you back to your life and back to your job as soon as possible.  Call us today at (205) 543-9209, we’re ready to help!